Each month, I get asked lots of questions within our “Shane’s Inner Circle” podcast.  This has been a very wonderful experience for me, getting direct feedback and understanding where all of you are going in your careers.  One of those questions was about building a color palette for your film and really stood out for me. So I wanted to take some time to share this process.

It is not so much the idea of getting into the color bay and doing the color process on your DaVinci Resolve setup, but before you even begin shooting.  From pre-production, you should start to look into the costumes of a film, and the art direction and start building the proper look and tonality of the film from what you are pulling from the pages of the script.

We’re going to dive into my process and I’m going to give you ideas of where to start with your projects and how to create that look that you will capture in camera.  This is so much more than any sort of “preserving the look” conversation or having anything to do with post-production.  This is the foundation of the look, painting with light and your camera.

I like to do a specific color palette chart that I bring along with me and its classic colors from the late Victorian age and early 1900s. Sherwin Williams makes this Victorian pallet as well as a Craftsman pallet, and it has all these wonderful colors that I like to use on all of my sets.  I specifically work with the production designer to get his or her thoughts on it as well, but this is a wonderful way to kind of get it in the ballpark. They’re very unique and they’re not too powerful and I think they add a wonderful pallet depending on the mood and tone of your film. Selecting the Mood & Tone of a Film

Now, how do you find the mood and tone? This is done through the production designer, the director, cinematographer, and costume designer. We sit down and talk about what the mood and tone of the film should be.

Need for Speed Mood and Tone

Let’s look at Need For Speed, you can watch it. We used a still photographer named Todd Hido as our reference. His light is very naturalistic. He has a very strong use of color in the cyans, the blue tones, the very tobacco-y warm-y gold tones, and browns. So, with that palette, we got production design, we got the wardrobe, and everything together. We created the palette for Need For Speed and we created Tobey Marshall’s, Aaron Paul’s character’s world, his shop, and the interior, and the color of the walls, the paneling, the shop walls where he worked on his car, the light quality in there. We wanted to do very mixed sources and that’s something that Hido does as well. Cool white mixed with sodium vapor, mixed with metal halide. We did a lot of mixed source lighting as well, and this was the style of the film and the color went along with it. We didn’t want it to be a desaturated world, we wanted people to feel alive and the skin tones to have vitality. When you were on the street, it wasn’t just this mundane brown of sodium vapors. It had great contrast, and a golden mix of color, and was very hyper-real, right on the edge of reality, of being just a little too over the top. We rode that very thin line to bring that reality-based story, as well as reality-based driving and stunts. So, we didn’t do any CGI work in the film, including no CGI cars or helicopters. We were putting the actors in the scene, at the moment, immersing the audience as if they were driving behind the steering wheel. The color palette was that kind of world, and working through this, you design that. I try to take a still photographer’s image as inspiration and use it. It’s a great way to find the mood and tone so everyone could see the still and see where we are headed.

Finding the Right Look for the Project

Every project is going to be different and bring a different look and feel.  I used a book called Bound For Glory for The Greatest Game Ever Played.  This book was 1,600 reclaimed Kodachrome pictures that were found in someone’s attic during the FSA period, this was around the late 30s to early 40s.  These had never been seen before.  They were discovered in 2003, printed in 2004, and bound in this book called Bound For Glory: America In Color.  It’s an incredible book and that was my inspiration for The Greatest Game Ever Played. From Bound For Glory

Heavy contrast, beautiful rich colors, shadows and contrast, darkness would go jet black, no detail. This was Kodachrome.  It had a very minimal latitude so two stops down went into blackness. It had a very chalky aspect to its contrast as well, so you had that extreme contrast, but then there was a chalkiness in the black sometimes.

Developing Inspiration for The Greatest Game Ever Played

We did a very unique process we called “Chalk and Drop,” where to create this style of photography in the Greatest Game, we took the mid-tones and cranked them up all the way, pushed the mids way past their breaking point, and took the blacks and completely crushed them. The Greatest Game Ever Played

That mix of when you push the mids and crush the blacks created a chalkiness, and a kind of a halo transitioning into the black that was the look of the film. Taking the color palette of these Bound For Glory shots, really showed the power of this color. I didn’t want to do a sepia tone 1900 period look. We wanted it to be a very progressive but period piece.  We wanted to take the audience on a journey whether they were flying with the ball, or being hit in the face with a golf club.

The idea was for the audience to feel as if they were getting punched. We wanted it very interactive. This allows you to enter the golfer’s mind as if you’re on a tee and seeing the crowd. Harry Vardon’s power is he would turn the golf course that he was on into a links course that he always played in Britain.

Francis’s vision was up at the tee box.  When he was about ready to hit, he would literally take his mind and bring the pin right up to his face… even though it was 400 yards away. He hit it like he was hitting it at 6 inches. He had that kind of mental telepathy of right in line and focused on that point.

These were the things that inspired the color palette. We used the Craftsman palette from Sherwin Williams, worked with this still photography, and the old FSA Kodachrome prints for the inspiration and the look and the feel.

For each project, I dive into the character of the story. I search for the heart of the story and then decide where to go with a look and motivation. Photography references from my favorite artists inspire me and see the world through their eyes. I have done this on every film and every project I have done throughout my career.

Take the time to go into your neighborhoods and find books, prints, or research online to find what inspires you. Start building a catalog with both your work and others. You want to be thinking of new ideas, and seeing what colors work well together.  It’s surprising how much you can learn from Lowe’s or Home Depot by looking at paint swatches. Then, compare those swatches with nature to see how colors compare and contrast. 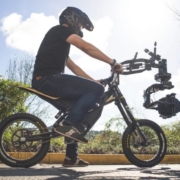