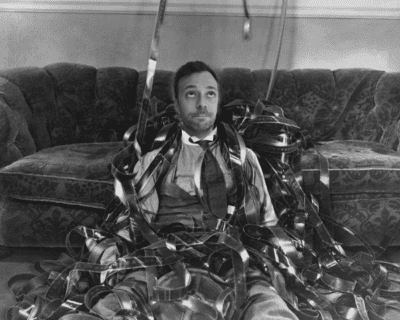 When I was a youngster, Buster Keaton was my hero. I could watch his movies whilst my parents were going around the house with a vacuum, when I was eating my lunch, when I was mid-telephone conversation. His movies spoke for themselves without ever needing to speak at all!

What is key to remember is that in “Golden Era” Hollywood in the 1920s when Keaton began making movies, everything was like this…

What a lovely family comedy this one sounds

Every emotion and storyline told through cards interspersed amongst short moving pictures. Imagine if movies were like this today: Just before clicking his fingers and consigning the whole human race to dust, Thanos turns and looks at Tony Stark, semi-clad in his Iron Man metallic garb, crushed by the remnants of his planet and opens his mouth to speak… Bit of a buzzkill, don’t you think? Not Thanos, the title card. Okay, Thanos too.

Indeed, the average number of title cards in a silent film in the 1920s was about 240. That’s a lot of breaking action to give plot! My poor folks who have a pair of reading glasses would have them on and off that much it could’ve taken an eye out!

Keaton believed that feelings, emotions and plot could be conveyed through facial expressions, gesture and movement alone – which it most certainly can! For example, I knew within seconds that the guy driving the car I pulled in front of at the traffic lights this morning hated me, just from a hand gesture. Complex emotions can be conveyed that way. My brother and I used to communicate through nods and grunts – at times for my parents it must have been like being in a immersive theatre performance of Planet of the Apes.

Back to Keaton then. The most title cards he ever used, in fact, was 56. He is famously quoted as saying”Charlie Chaplin and I would have a friendly contest: Who could do the feature film with the least subtitles?”

I think Keaton probably won that one as we have to remember, he was a clown – expression was his industry and his talent.

In 1899 he was touring on stages across America with his parents doing comedy. His act basically consisted of him mocking and disobeying his father who would then would respond by throwing him against the scenery or the orchestra pit! And it went down a storm! Beating children was clearly seen as ripping good laugh back then. 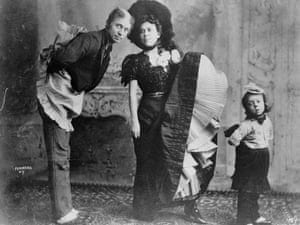 Buster there with his parents wearing his Nike “Air Keaton” handle…

To make the task of throwing him easier, a suitcase handle was sewn into Keaton’s clothing – a common problem when throwing human beings into crowds of onlookers is, of course, grip. One story that resonates is that his father became so sick of people talking during the show that he would throw his son at unassuming audience members who refused to shut up – even breaking one person’s nose! Can you imagine the moment he sat in triage at the hospital?

Man: I was asking my wife if she wanted any snacks during the interval and, when I turned back to watch the show… a CHILD with… a HANDLE on his back, butted me in the face!

Thus, if you have ever seen a Buster Keaton movie, you’ll respect that this was where he learned to “take the hits” as it were.

Indeed, his act became known as “The Little Boy Who Can’t Be Damaged” (I’m sure that was a Nat King Cole Song) and “The Roughest Act In The History Of Stage” – that’s a pretty outstanding feat when at that time there were vaudeville acts such as: “Painless Parker” – a dentist who used a cocaine-based solution to numb huge numbers of his audience and remove their teeth live on stage (Same man as before in triage at the hospital – Doctor: What happened this time? Man: I wash washting thish show witsh a dentisht…); and Frank “Cannonball” Richards who, you can probably guess, stood still and was shot in the belly with a cannonball! I bet that stood him in good stead when the work dried up, going to a careers advisor with “not afraid of cannons” as his resume – “Have you thought of being an 1700s Pirate?”

As a piece of trivia for you, Keaton adopted his famous deadpan look whilst involved in the stage show having learned that he could obtain a greater laugh if he didn’t show any emotion whilst hurtling through the air! Nobody liked a laughing child being thrown at them.

INTO THE WORLD OF FILM This whole madcap life as a vaudeville entertainer eventually led to Keaton getting involved in the world of film. Thankfully for us and the movie industry as a whole, “Fatty” Arbuckle (have a guess what gave him that name!) employed him as a gag man (writer of jokes and comedic ideas) and co-star for his movie “The Butcher Boy” 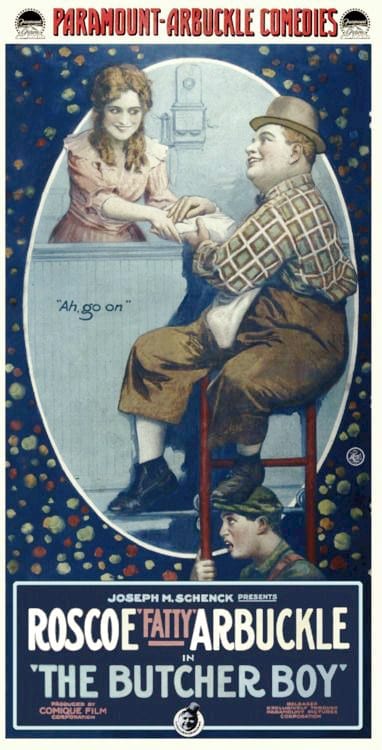 I don’t know the movie, but when the pull quote is “Ah, go on” then you know the budget has gone on marketing Here’s where Buster Keaton was gold – he did all of his own stunts! Now, for those of you who don’t know Keaton’s movies, then you’ll sit there and think “Jackie Chan does his own stunts and so does Tom Cruise…” To be honest, Cruise has got the whole “why don’t we have a plane take off and I’ll be clinging to the side of it?” thing down so respect where it’s due to him and also respect to United for sticking to their policy even with a celebrity.

“I just want that one day, when I retire, that people still remember me like they remember Buster. I really want someone to respect me the way they respect Buster.” – Jackie Chan (some action movie star…)

However, Cruise and Chan are doing all of this now – a time where health and safety laws rule a movie set, where insurance companies won’t touch a set that hasn’t been dummy-proofed with every corner bubble-wrapped and every C-stand end covered by a tennis ball. Keaton was operating in the maverick times where men were eating sandwiches on the unbuilt, girder-laden 42nd floor of a skyscraper in Manhattan! There were other girders, lots, but this one must have been the comfiest…

Every scene of Buster Keaton’s films tells a story and my favourite has to be for his stunt in Steamboat Bill Jr where the house front falls during a gale and lands with him being in the window frame and thus, unscathed!

Here’s why that shot was amazing… the house front apparently weighed about 2 tons and for the window measurements, to quote Keaton, “I had a clearance of two inches on each shoulder, and the top missed my head by two inches and the bottom my heels by two inches. We mark that ground out and drive big nails where my two heels are going to be. Now we had to make sure that we were getting our foreground and background wind effect, but that no current ever hit the front of that building when it started to fall, because if the wind warps her she’s not going to fall where we want her, and I’m standing right out front. But it’s a one-take scene and we got it that way. You don’t do those things twice.” (Then the 1st AC said he’d messed up the focus!).

This all links to the reason why he was called “Buster” too – and not his birth name Joseph, which has a significantly less impressive ring to it. Keaton fell down the stairs when he was younger and a fellow vaudeville performer you may have heard of named Harry Houdini saw it and exclaimed “that was a buster” (American for a pretty painful fall – I’m English, so if he’d fallen in my country and been seen by Chaplin, then he’d have been called “Oopsy daisy Keaton”). Houdini on the right – before he escaped the selfie part of the photoshoot. Also, Fatty Arbuckle looking like an extra from Shaun of the Dead.

Having told that incredibly cool story (and hopeful that I one day fall over in front of one of the world’s great performers so I can christen myself with a nickname that isn’t ‘Haighy’), here’s some examples of “Buster” doing what earned him his name…

Before you pick your jaws up off the floor, let me just throw this one at you (like Keaton’s father threw him into the crowd, with a bloody big suitcase handle) – Keaton’s rule was to “Never fake a gag.” To the point where he broke his neck doing this stunt below and carried on filming only complaining of a headache! Yes, Tom Cruise broke his ankle filming M:I Fallout and that was incredibly badass and Jackie Chan has broken arms, legs and some of his own bones too, but a broken neck?!

Look at today. Look at the amount of green screen and CGI that we use today. The purveyors of “fix-it-in-post”. As a film fan, as a Keaton fan and as a person who has sat aghast at the same video that you just watched right now (and I made it!), how incredible does it feel to know that nearly a hundred years ago Keaton literally stood in the place I’m sitting right now (I must be lazier!) and did that? He worked out that he could jump between two buildings, stand in a spot that was inches wide and have the building fall around him, calculate the exact moment that he could reach out and grab a cab (literally) without having his arm ripped from its socket!

What a creative genius — what an inventor… A guy like that, you just sit back and say, okay, I’ll never get there! – Jim Carrey

Buster Keaton died on this day in 1966 in Woodland Hills, California. Less than 5 miles from where I am sitting. This is my homage to him.

We tend to judge someone by the legacy they leave, the mark that they make and the people who look back at what they did and say “wow.” Watch Wes Anderson for the “comedy in the flat” that Keaton made his signature, Bill Murray for outstanding dead-pannery and Jackie Chan for an ethos of stunts being real even if they hurt! Watch this awesome video from Every Frame a Painting that examines his comedic style more and hopefully you’ll feel, as I do, that Buster Keaton’s enduring legacy is that he left us, quite literally, stunned to silence.

Silence is of the gods; only monkeys chatter. Why Storytelling Should Matter To Filmmakers 5 Reasons BlueShape Batteries are the Best for Filmmakers