Today we’re taking a trip all the way to New Zealand to introduce you to Andrew Stroud. Andrew is an up and coming cinematographer based in New Zealand. He has been interested in photography since he was seven years old. In high school, he spent most of his time between classes in the photography laboratory developing the many rolls of film that he shot. He feels that this is how he developed his love of capturing images. While he loved photography, he also enjoyed collaborating and working with others. That is one of the things that drew him to filmmaking. He loves working with a director and crew to come up with a visual language for a project in order to tell the best story possible.

While Andrew was in school, one of his art teachers helped to provide his inspiration and encouraged him to pursue his talent. He claims that this was very influential in his life. That teacher showed him that art is about the expression of emotion, which is evident in his short film, Echoes, which we are featuring in this post. Andrew grew up in the South Island area of New Zealand. Only 23% of New Zealand’s 4.5 million inhabitants live on the South Island. Therefore, there was not much opportunity for filmmaking there. During his five years of university, Andrew started doing lighting for bands and touring artists. He also did some commercial work. While working on a commercial, he realized that he could combine his love for photography and the camaraderie of working on a set. After he graduated, Andrew re-located to Wellington, NZ on the more heavily populated North Island, where there is more film industry activity.

Unfortunately, the film industry in New Zealand is not as robust as it is in other parts of the world. Most of the work available is on commercials and TV drama. In spite of the relatively small size of the film industry in New Zealand, Andrew has been able to collaborate on several New Zealand based features such as The Lord of the Rings: the Fellowship of the Ring, and The Lord of the Rings: The Two Towers, where he served as a Clapper Loader and Assistant Camera. He progressed to a focus puller on The Lord of the Rings: Return of the King and the blockbuster film, King Kong. After that, he moved on to become the Director of Photography on many short films. He was also the Director of Photography, 2nd Unit, on the 2013 series, Spartacus: Blood and Sand. For a list of Andrew’s work, please visit his website, www.andrewstroud.co.nz. We would like to share Andrew’s short film. Echoes.

Echoes was commissioned by the Lexus car company. To highlight the new look and feel of the brand, Lexus approached The Weinstein Company to produce a series of short films that would offer similar levels of inspiration to viewers. These beautifully designed short films premiered in early 2013. The series features five innovative directors crafting deep experiences to reach and engage people from all cultures, each uniquely expressing life as an amazing experience.

The Weinstein Company asked Special Problems to do the project for the Lexus short film, Echoes. The folks at Special Problems sent Andrew a script at the end of 2012, and the short film was shot in January of 2013. The directors, Campbell Hooper and Joel Kefali, also sent stills to reference in the form of art and photographs. Special Problems like to be freeform and collaborating on ideas. They like to let the camera be free to roam and sometimes find a different frame that they didn’t initially see. They prefer to hand the cinematographer an idea and let them ad lib and be more creative, rather than closely adhere to a pre-determined script. Echoes was shot over three days, mostly at night. Andrew prefers to use practicals as much as possible. He prefers a naturalistic look, doesn’t like sensationalized light, over-produced. He likes to use the light around him and uses tools to shape, form and enhance it. His camera of choice for Echoes was the Alexa. He felt it gave the organic look the project needed. With the locations and little light, it really performed well. The workflow with ProRes was beneficial as they were able to move quickly, shoot a lot and not be hindered by process of RAW. Lens-wise, he chose Cooke s4s as he liked the highlight rolloff and skin tones paired with the Alexa.

According to Andrew, the folks at the production company, Special Problems, are extremely capable practitioners in post-production and often do their own post work. In Echoes, John Baxter, from Perceptual Engineering, was the Flame artist, compositor and also graded the film. Please join us in congratulating Andrew on his outstanding work on Echoes. We look forward to seeing more of this young man’s work in the future!

Just prior to publishing this post, we found out that Andrew won the PLS Best Cinematography in a Short Film award at the New Zealand Film Awards.

You only need to answer a few quick questions along with a link to your work. 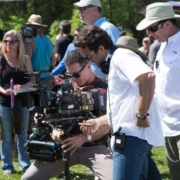