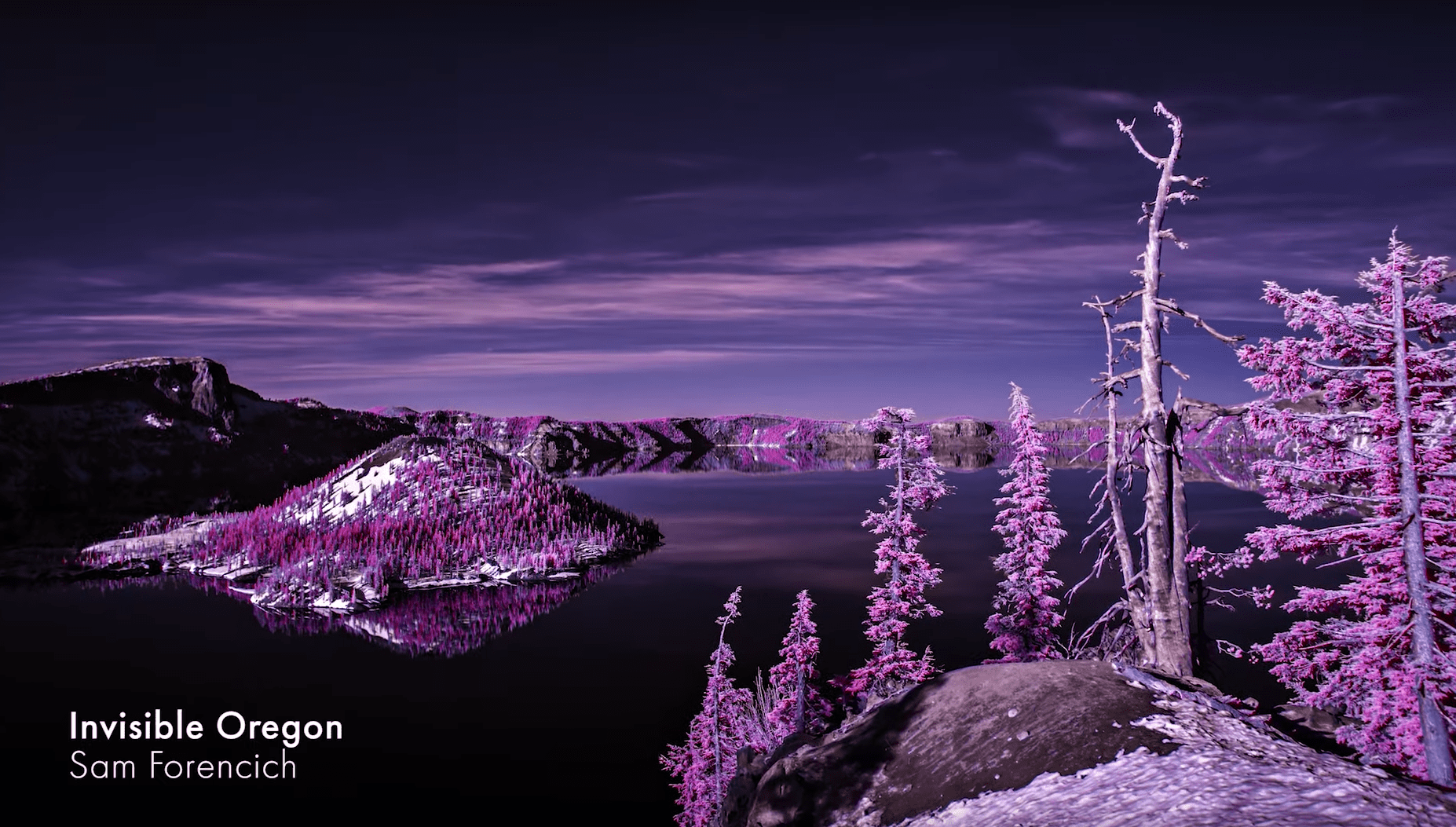 Notice anything odd about these images?

This isn’t some effect that came about in post. It’s not been played with. It is the world around you, the world that your eyes can’t see. These were captured with Infrared light and they’re an example of the creative playground photographers and filmmakers can explore, pushing the boundaries of our art.

This is the Electromagnetic spectrum… We’re going to see how color Infrared film captures the infrared light that is beyond our visible spectrum from the red end of the spectrum.

This light, that’s invisible to the naked eye, can be seen by your camera’s sensor and special filmstocks. So this light is effectively HEAT!

Infrared-sensitive filming was developed during World War 1 by the United States to improve aerial intelligence photography and spot the heat source of enemy soldiers and vehicles.

After this it was used in astronomy in the 1930’s and is now regularly used for aerial forestry surveys. Now, with silicon based sensors and commercially available infrared film, you can experiment with IR, creating artful and what some might call surreal landscapes like those at the top of the page.

IR is normally seen as pollution in your image. If present it distorts colors especially blacks and greens.

ND filters previously didn’t block IR because photochemical film wasn’t sensitive to it, but now with the advancement of digital sensors, we are seeing into the unseen and IR pollution is becoming a big problem. But IR “pollution” is just “pollution” when you don’t want it – one man’s trash is another man’s treasure!

Shooting in IR is actually very easy to do, but only after you have learned some of the basics and thought about why you want to use it. Like with all rules there’s a time and place to break them for creative purposes. IR gives your images incredibly dark skies and water and crisp white foliage. Look at what it does to skin. It allows us to see deeper into the skin rendering skin softer, creamier and more porcelain like and the eyes… become deep, translucent wells. You’ll become used to having some welcome surprises and things you haven’t seen before. Here’s the issue: You’ll want to go out and try this immediately after this video and article BUT most modern cameras have a silicon sensor that is very sensitive to IR, but they have a filter blocking it. Some cameras allow that filter to be removed, like RED, or Panasonic, and some don’t have any IR blocking filter at all – Blackmagic cameras for example. Most ND up until a few years ago did not block IR, which became an issue, so now we have products like the Mitomo True ND and Tiffen Naturals which block IR.

Here you can see, without IR ND the image gets brown and pink by the time you hit 2.1 ND, and that’s usually really bad, but imagine the creative possibilities if you actually wanted that – if you were going to turn that into black and white, now take a look at it.

LENS CHOICE – Your lenses were designed for visible light so get ready for some surprises.

TIME OF DAY – Say goodbye to Golden Hour, shooting at sunrise or sunset, because with IR that doesn’t produce the best lighting. Shots that would normally appear flat with visible light will appear punchy with infrared light. Look at this example: Most of the directors’ work here have used IR for surrealism. This example of a documentary from the Congo that was shot on Aero chrome.

In this documentary the IR makes inanimate objects leap out from the background – for example the assault rifles here.

IR is about finding another way to look at the world, about making viewers reassess their certainty of how things look, about challenging conventions. This is a whole new way of looking at our planet, a whole different question as to what we are seeing. Our eyes are seeing a tiny bit of the world, a microcosm of the amount of light that is out there. IR opens the door. In the same way, cinema has always catered to the magical, transporting us to new worlds, new universes even sparking our imaginations for what is out there and forcing us to understand that there are things on this planet that we don’t see.

IR makes the invisible visible and allows you to enjoy a whole new world of creative possibilities.