Freefly has been instrumental in flipping the whole paradigm on how I shoot movies. They’ve created a tool that is for professionals, but affordably priced. This has allowed absolutely everyone to get their hands on one. It’s not about the trick shots, it’s not about the hand-offs –  those things are always fun, don’t get me wrong – it’s more about figuring out how we can use this incredible device that Freefly has created to shift the paradigm of how we make movies. How does it change the dynamics within the movie making industry? Welcome to the future.

Let’s hop right into it with an analysis of camera emotion relayed through the camera’s movement.

The camera has this emotion attached to it, this frenetic energy throughout that entire sequence.

But WHY do we do this? Why do we move the camera this way?

Because it’s all how we want the audience to feel. When McG and I got together for Terminator Salvation he wanted the audience completely immersed. He didn’t want them to have any escape. It’s John Connor coming in, they are attacking Skynet. We start to educate the audience. How do we educate them? We fly in on a missile point of view to its detonation point. We’re coming in hot and flying first person. We travel in the rocket’s POV in “Terminator Salvation”

We immediately hit the ground and this shock wave goes off. This is the mother of all bombs and it comes right at us. The rocket explodes and a shock wave hits the camera

A Terminator T46 comes into the foreground. From there I’m panning around seeing airplanes coming in dropping bombs, helicopters landing, people dropping down, running by camera, all this stuff. We start to see more elements in frame A helicopter brings troops in

I tilt up and we see our leader, John Connor. He comes down in a helicopter, crushes the terminator head with the helicopter and puts 2 bullets in it. We then come right back up to a close-up. John Connor descends in a helicopter After all that, we land in on a CU of our hero

That is why you move the camera. You want the audience to feel the immersion. You want to see the scope of everything. This one shot from Terminator Salvation shows you the scope. It gets you right into the action. It shows you that these guys are kicking some serious ass. But, when it’s all said and done, that’s the set-up. Then, he goes underground and they start firing back at him. They start to destroy him. Again, it’s all setting up the audience.

As filmmakers we move the camera to make audiences feel. We don’t move the camera just because we can – there has to be a purpose. It’s all about creating the proper on-screen environment and heightening your actors’ performances. In Crazy Beautiful I wanted Kirsten Dunst to feel locked down in her crazy step-mother’s house. Whenever she’s in there, the camera is not moving.

I wanted Nicole to feel trapped, so I didn’t move the camera while in the house

These types of rules of engagement that you’re deploying help you tell a better story. It’s about creating guidelines for yourself and knowing when to stick to them and when it’s ok to break them.

So what’s a MoVI? If any of you have been living under a rock for the last 4 years and don’t understand that this device is literally going to change the movie business in every way, shape and form, you are missing out. The rock that you’ve been living under

The MoVI Pro is this gyro-stabilized device that ‎Tabb Firchau, the creator of the MoVI, has continued to hone. From the invention of the M5, M10, M15, and now the Pro, this device is absolutely amazing. It’s become even more user friendly with how it tunes itself and how it is even more versatile. You don’t have to be scared of this baby anymore because it has a mind of its own. We have all seen the wonderful shots where you have hand-offs and these all-in-one-shots. I’m all about those, but what I want to really talk about is how this can make me faster. That’s what I’m more interested in. It’s all about how I can be more productive and efficient on set. How can I get more coverage and deliver the director’s vision more powerfully?

Fathers and Daughters was my gateway into using the MoVI. It was invented around October of 2013 and I was using that thing on set for a feature film a few months later in early 2014. The MoVI allowed me to create this new energy that I hadn’t seen on screen before this. 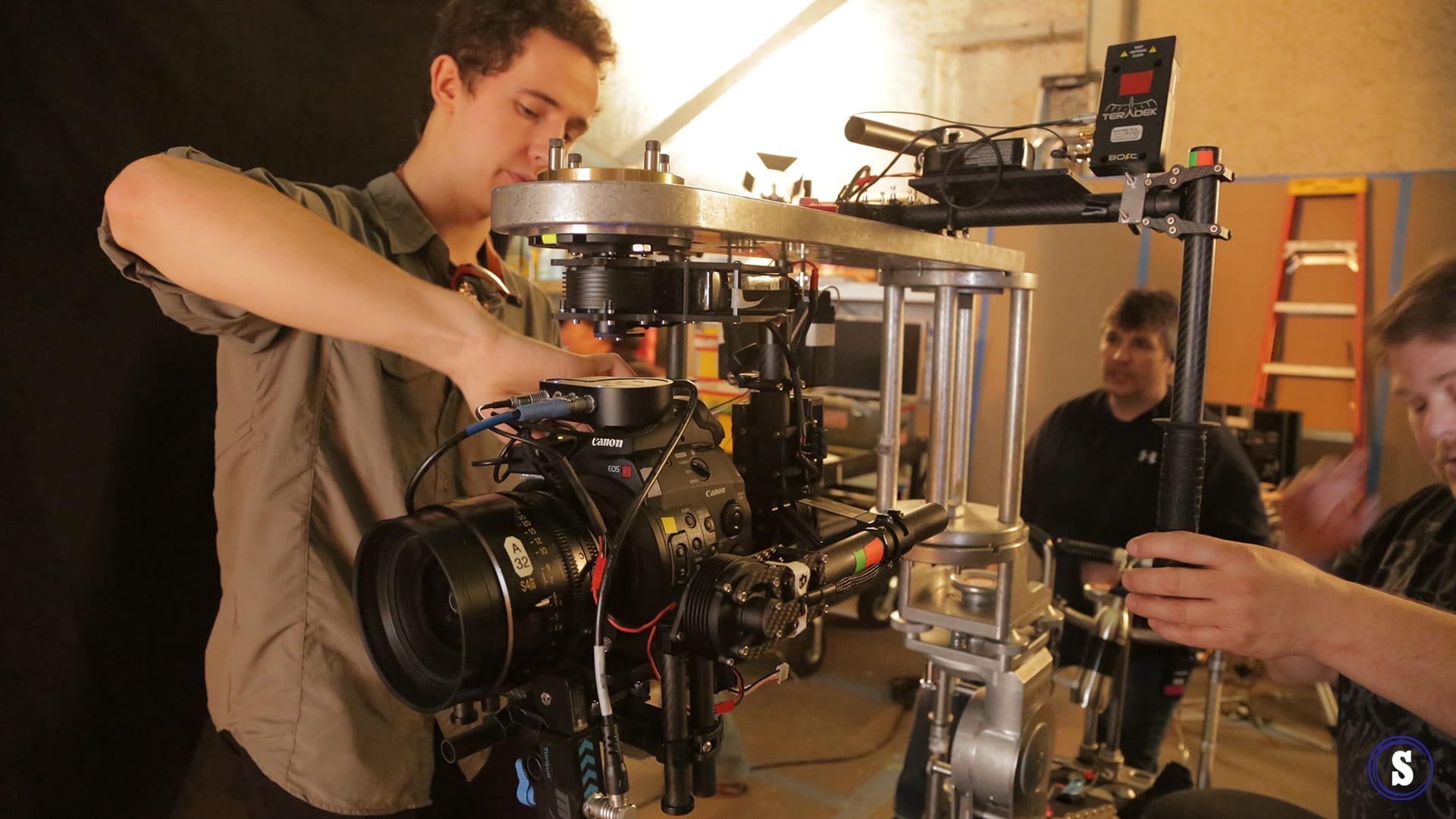 What I would do for this movie was create this MoVI camera ballet. So what we did for this sequence in the movie was we took our A Camera, pulled the actors back into a doorway, and then down the hallway. We backed off one way as the actors walked in, we followed and the MoVI went in with them, and then to be handed off to a grip sitting on an apple box.

Our 3 MoVI Ballet in “Fathers and Daughters” My 3 camera MoVI ballet diagram for “Fathers and Daughters”

The B Camera was mounted on a dolly. That dolly came out of a broom closet because we saw the whole room when we came in there with the A Cam MoVI. A Fisher 10 had the MoVI on it. Then we have C Camera which was hidden behind this office door, and it’s on another MoVI that walked in and the operator sat down on an apple box. He settled in for a 3 page scene. …Ok, Shane, what is that thing?

I said, Ok, Octavia, this thing is the MoVI.

What does it do?

It’s a handheld gimbal that moves effortlessly with you wherever you go.

She goes, I love that thing. Octavia Spencer in “Fathers and Daughters” OTS from C Camera

Then the director called wrap for the day and she was astonished. Well, we all were. In 6 hours we were able to complete this scene – and part of another – and it just gave so much freedom to the actors. The actors started to come to me after using this system. They’d say things like, Shane, I’ve never felt so alive on the set. I feel like I can move around, absolutely free with this device. Amanda Seyfried in “Fathers and Daughters” OTS from B Camera

We are getting 7 shots in one take where we would have had to traditionally break it up into some overs, inserts, and what-not. We molded it all into one in order to elevate the actors’ performances.

There are like 900 possible ways to use this device, but I’m only going to talk about 90. HAHA! This tool is so versatile. It makes everything so much faster. This was the answer to my question about efficiency on set. It’s a hand-held device, a remote head, a pole dancer, a poor man’s camera car and more.

That’s what’s so special about this tool. You don’t need crazy set ups or equipment to use this device. It has completely shifted the way I shoot films, effectively flipping the movie-making paradigm. These were only but a few of the ways I was able to use this system to be more efficient on set, get the shot for less, and adapt to changing times. This is the future.

This wraps it up for Part 1 of my Freefly discussion, and I have so much more to say.

Next time we’ll hop into more ways you can use a Freefly MoVI. Screenwriting Software 2018 – Which is Best for You?