Prepping a movie is one of the most important tasks you have as a cinematographer. You can design the whole movie, and organize, create, and schedule it in a way that is best for light.

Today is a perfect example. Check out this shot. This is a case of being in the right place, at the right time, resulting in a great performance. Hire a Crew That Makes You Successful

The next most important thing is hiring a talented crew. In this movie, I hired one of the best teams that I have ever worked with:

Dany Racine is my key 1st A.C. – one word describes this guy WOW!! Ohh and a second one – SHARP!! Along with his tight crew of Soupharak Keoborakoth, Marie-France Simard, Laurent Alexis Guertin, Vincent Gouin, and Jean-Sébastien Caron, he keeps us organized and ready to make magic each day.

A camera operator who has your compositional aesthetics and instincts is very hard to find, except in Montreal. Daniel Sauvé is our A camera/Steadicam operator and he rocks it out every day!!!

I also brought HV Elite Team Mike Svitak up for 2.5 weeks to shoot all the Canon 5D sequences in the film. As always, Mikey added exceptional value with his energy, organization, and eye. I am using my hybrid approach on this film, but going much heavier on film. Probably 85% film, 15% 5D footage.

Mike returned to Montreal to lens second unit for me and we all were quite impressed with the footage.

During the prep process, I try to be as production-friendly as possible. You can put much more up on the screen if you are organized and have a working knowledge of the tools required to bring the director’s vision to life.  This gives production two to four weeks of bidding and budgeting so that everyone can figure out how we can pay for all of this. 50′ Technocrane captures the final shot of the film My tried and true camera of choice. Film is where it is at.

This breakdown helps production with the budget and lets the camera crew know exactly what gear is needed for every scene, what extra crew they will need, and the film stock that will be shot.

When I presented this to Dany, my key 1st A.C., he was blown away! He had never seen anything like this from a Director of Photography.

My general advice to aspiring cinematographers:

It is not only about the creative vision and being an artist, you have to be organized and be able to deliver the director’s vision while keeping it all within the budget box. Marie-France runs in a mag ASAP as the light drops with the impending storm on the horizon, snowmakers play in the foreground of our shot We decided to go spherical on our film camera package and Panavision Primos for our lenses. I brought all my 5D bodies up for all the action stuff, as well as a ton of dawn and blizzard plate shots.

Mike Svitak headed up the plate unit, driving around with 4 cameras mounted onto a sedan, that pointed NORTH, SOUTH, EAST, and WEST.

These cameras shot all 24fps with 24mm Canon L series glass mounted to them.  We rolled ten hours of driving footage for our four-page scene in the Luxury car, driving at dawn. 3 Cameras mounted East, West, and South on the back of the picture car, the final camera for the plates was mounted on the hood of the vehicle Tight shot of the East, West, and South 5D’s rigged for the Plate work in Deadfall I wanted to do a poor man’s process, which means not actually driving, but creating moving lights and using a 2 x 4 to move the car a little so that it feels like they’re driving down the road. This enables our actors to work on stage and not in the bitter cold.

They also did not have to deal with having the car windows down while recording bad sound that they would have to ADR in the sound booth. We’ll shoot our actors in the car against green screen and key in Mikey’s background plates at dusk for dawn.

Many of you have asked me what apps I use on location. Here are the ones I never leave home without, especially on Deadfall.

A sun tracking app that works very well and gives me the ability to find the location of the sun at any time, in any place on the planet.

This is another sun tracking program that literally gives you the arc of the sun while overlaying on your iphone’s camera. Very cool.

This app helps me match my 5D, and 7D with 35mm motion picture lens focal lengths.

This program gives you field of view and depth of field of all formats. Absolutely essential in figuring out hyper-focals as well as field of view for crane shots, long lens shots, etc.

This app gives you a fast field of view with a live video feed that shows you a box that represents your field of view. Beware, this app has buried me with not being accurate with 7D, 5D, and 1D representation.

This app has given me the most accurate weather out on location that I have ever experienced. Keeps you in the loop with advance forecasts and alerts. 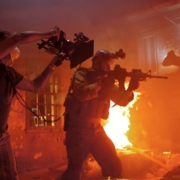 Act of Valor: Out of the Box Filmmaking What’s Your Go-To Camera Format? The World is Your Filmmaking Canvas
29 replies