Wow, what a ride! Again, thanks to everyone who gave it a shot and entered our Where’s the GoPro in the Need for Speed Trailer? contest. It wasn’t easy, but eight of you correctly answered all of the trivia questions and uploaded the two correct screenshots as seen below.

I would like to shout out to our seven runners-up: Tom Guilmette, Vero Murillo, Morgan Simpson, Kevin Larsen, Jeff Courter, Ethan Andrews, and Travis Hayward. The first person to upload his correct entry was Joshua Shores from Baldwin, Wisconsin. Josh is the winner of a GoPro Hero 3+ from our GoPro sponsor and a phone consultation with me (Shane Hurlbut, ASC). Congrats Josh!

We’ve gone through the trailer and identified each of the cameras and lenses used. What a wild ride! Watch the trailer again below to see the mix:

Canon C500 with a 14mm Cooke S4 Prime. The camera ate it and the whole base was ripped off. 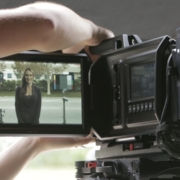