I walked into Samy’s Camera last week and a camera assistant was mounting gyros on the 5D to stabilize the camera. She was getting beaten up by the mount and said, “I cannot get this clamped on here.”

I said, “Hi, I would love to help you with this rig.” She said she would love any advice I could give her. I grabbed the gyro, removed it, placed it on the counter, and said, “There you go, now you’re all set.”

She looked at me for a second. I told her she just needed a good handheld set-up. The HV Moviemaker Pro was booked immediately on the spot. It flew to Texas in the overhead bins to shoot a music video directed by Mark Pellington and lensed by my good friend Eric Schmidt for Crossroads Films.

They used 2- 7Ds, 1-1D Mark IV, a set of Zeiss ZE primes, the new custom HV base plate along with the new View Factor black Exoskeleton, HV lighting monitor, and all the other goodies to bring the video to life.

Eric came by Bandito Brothers Production Company to check out the Moviemaker, loved it, and mentioned the gyro incident at Samy’s. Once he put the HV handheld rig on his shoulder, he felt at ease and realized that it did not need gyro stabilization.

The secret is weight and where it is placed. This camera can be anything you want it to be. Strip it down to a still camera or dress it up on a tripod with matte boxes with all the bells and whistles. But the fact remains that it is a 2.5 lb still camera, which just needs a little love in the right place for handheld work to shine. Dressed Up To The Nines For Intense Long Lens Work A Gyro is one of the most unnatural pieces of movie-making gear you can put on this camera. I made the mistake of trying to use this device for the intense handheld action on Act of Valor. I would backpedal down a hallway and try to pan slightly to frame a SEAL coming down an adjoining hallway.

The camera spun out of control, ruined the shot and it just felt wrong. It added more cables, more batteries, more weight (in all the wrong places). And, the noise for sound was deafening so we scrapped it. Now, for helicopter and ocean work, I think I would entertain the use of one of these beasts. But other than that, I am not sold on this technology. The 5D, 7D, and 1D can be steady with good operating. Or, they can be shaky and intense if necessary to help tell the story. They can glide on a Steadicam, fly on a technocrane, soar in aerial photography, and land precise choreographed smooth moves on the dolly. You choose! 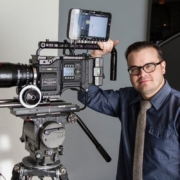