This is the sixth and final episode in the B&H series from 2011, with a transcript that follows. Although I’m using the Canon 5D Mk II in the video, this doesn’t apply just to the 5D. The methodology is the same for other HDSLR cameras as well.

HDSLR Educational Series for Cinema
Shane Hurlbut, ASC discusses what HDSLR cameras and tools can do. Aquacam, helmet cam, stake cam, suction cups, the power of the sensor, and fuel for your creativity.

We’re not in the moving mass business anymore. Look at this camera. It’s two and a half pounds. The last camera I used to shoot Terminator Salvation, my handheld rig was just below 57 pounds. When it went on to a dolly, it was around 70. This is my sensor. This is my capture device.

The compression on this card is the reason it looks like digital film. It softens the edges of the HD format so instead of you shooting something that looks very sharp and very plastic-like, this camera does it inherently by doing a wonderful slightly softening of this HD. They created a sensor that reacts and feels exactly like film.

We’ve got all sorts of stuff. Aqua cam. AquaTech, which is this incredible company in Huntington Beach, has built all these killer housings. This baby goes to 25 feet so it’s the perfect split level with the surf housing. You’ve got a wonderful viewing system here. All the knobs are perfectly, ergonomically designed to dial your camera in under water.

This is the exact helmet cam that the Navy SEALS wore throughout their whole journey. We were jumping out of helicopters, fast roping, jumping into the sea on Rescue Swimmer. We literally had the guy just jump out, go down in, fry the camera, but we knew the card was going to be fine.

You need a low angle shot? Well, usually in the day, the way we do it is we take a high hat and we put our head on it and we adjust it and we make it real low. We call this stake cam. You drive this thing in with a hammer, bam, into the ground. Now you have your three axis head. To be able to manipulate, you can put your camera, dutch it if you’d like.

Rigging these things to suction cups to the car is very simple. In cars, there’s not one place that you can’t put this camera. Now you’re rigging a camera that’s two and a half to three pounds, maybe seven, eight to ten pounds when you put your cinema glass on it, but still the footprint is very small. We used to have to hack the whole car up to be able to put them there.

The other thing about this camera is the power of the sensor, not only to deliver skin tones with amazing vitality, but also to capture imagery that is brighter than what the naked eye can see. We were doing a Marines commercial where we had to film down in the Washington, DC subway system. When we got our permit, we were told that we could not light anything. I was able to take the camera, put it to 1600 ISO, and the whole platform came to life. That is the power of this amazing sensor.

To sum this all up, does the camera perform incredibly well? Yes. Can it hold up on a 60-foot screen? I will prove it to you. Yes, absolutely. The sky is no longer the limit on your creativity. It’s the stratosphere. HDSLR cameras are an incredibly powerful brush. I cannot wait to see your canvas. How To Make a Call Sheet 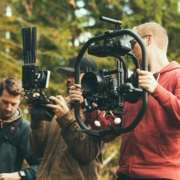