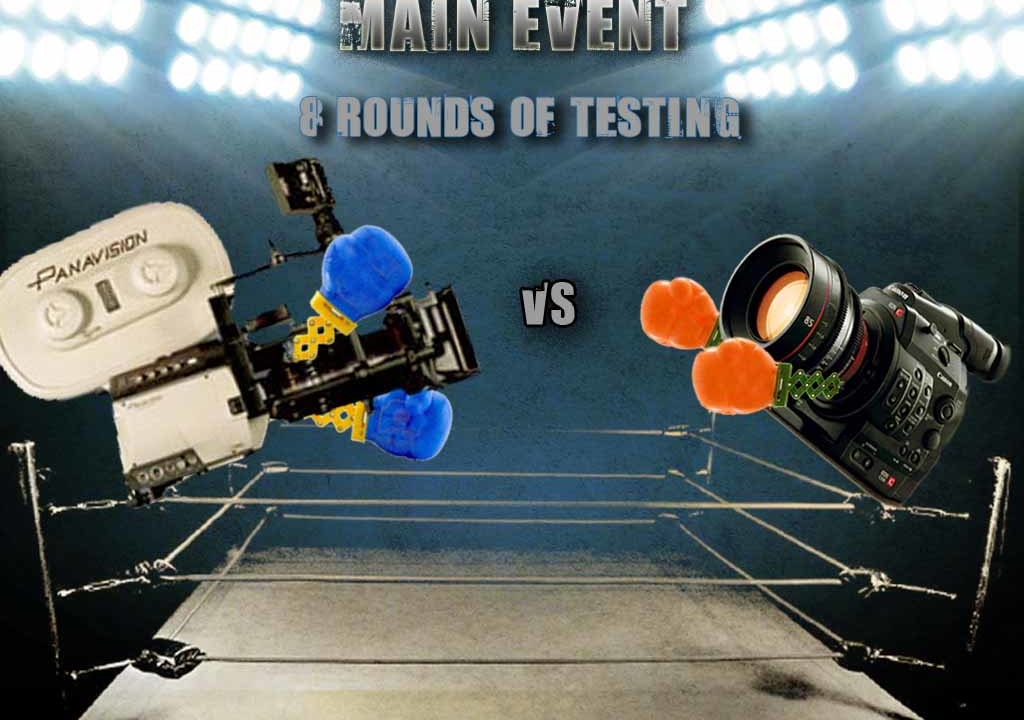 Today we’re doing a side by side comparison of the Canon C500 and a good old fashioned Kodak Film Stock. March 14 is right around the corner, the theatrical release of Need for Speed. On opening night, when everyone sits in their seats and the lights go down in the theater, hopefully you’re in a 3D theater that has a 60 or 80-foot screen. Get ready to be immersed through a wonderful mix of art and science. This film was an amazing journey that I would never have been able to get through without my incredible crew: camera, grip, electric, stunt team, special effects, production design, costume, wardrobe, everything firing on twelve cylinders to be able to make this movie possible. Our Director Scotty Waugh had amazing energy and passion to make the whole movie practically and deliver a movie-making experience that will be unlike any other. To get to the final product, there were many camera tests that needed to be done. We wanted to show you some of them. I have talked in depth about the Canon C500. If I had to compare it to a film emulsion, I would compare it to Kodak. So I thought, why not do a test where we show film versus the C500?

We are going to break it down into five different tests that take you on my cinematic journey that infuses the look that we were going for on this movie. These are not just ‘make it balanced’ kind of tests or just raw tests. These are color-corrected tests that are set in the look and feel of how Scotty and I wanted the movie to look. Mike Sowa was our colorist at Technicolor. We all sat in a room and did these color corrections on a 40-foot screen, and we are going to be sharing this with all of you. So sit back, relax, dim the lights in your dining room, your office, your kitchen, or wherever you might be, and relax and enjoy the C500 vs. 35mm Kodak film stock.

The first test that I want to start with is the back light test for day exteriors. Back light tests are mostly about skin tones, looking at the color spaces of both cameras, and the subtle nuances of different skin tones on a face. In this test it was important for me to recreate real-world situations that we would actually be dealing with because they help me understand how the sensor or film stock would react in that exact situation.

During the back light test, we noticed that the skin tone when shooting with film was very creamy and gave off a kind of whitish tone. The C500 was still able to show the detail in her shadows. It falls off like a gentle slope, where the film falls off like a cliff. The C500 has a much wider range in the shadows than you do on film. 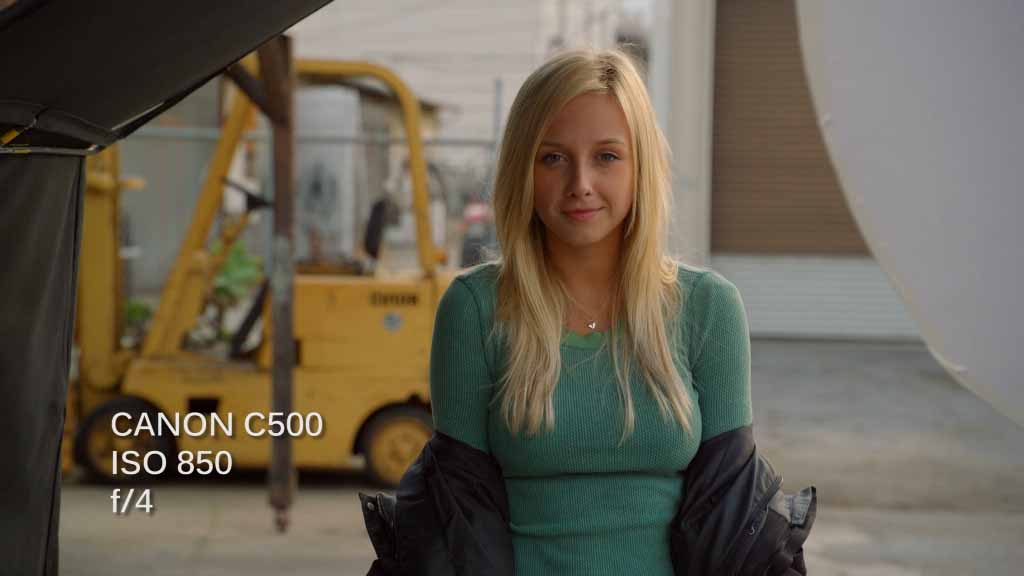 Overall the C500 really blew film out of the water on the back light test. Scotty and I really fell in love with the C500 after seeing how Monette’s skin tone reacted in this industrial back lit scene. The subtle nuances in tonality were absolutely beautiful. This camera somehow sees skin in a very soft palate. It has a creaminess to the skin, but the image itself is nice, crisp, and sharp. While Scotty and I kept testing the C500 in different settings, day vs night, etc., we kept coming back to this scene. You know what I love about the C500? It’s that we didn’t need to sharpen the image or crank the contrast, and we hardly had to put any color into it because it comes baked. You have to be very exact with the C500. I love that it’s almost as if you are exposing the C500 like you were exposing film. You have to get it right, and that’s what is great about being an artist. Looking at -2 stops down on the fill with the C500, you can see that the blue in the bounce is reading much more. And our warm key light, the gold light, doesn’t look as warm because the camera is seeing the blue a little more. I really felt that the C500 really energized the subtle colors, even with the background color. The C500 sees it beautifully into the shadows. It looks very creamy into the underexposed area.

The film really started to get a little ruddy and you start to see brownish red undertones into the shadows at -3.5 stops down. You can see that the film has got a slight grain texture to it and that the background wall was not blue, but grey.

The C500 is not as saturated on the skin, but what I’m noticing is the C500 seems to see the subtle nuances in the key light and in her skin tone a little better, which we really loved. This is what Scotty really responded to when he saw these tests. He just felt the C500 delivered a very real feel. I felt that both cameras delivered the test well. The fall off into the shadows was gradual and elegant. It did not feel like the shadows were falling off a cliff. Everyone always talks about how they remember film being so creamy and so beautiful on the skin and so forgiving. Well, I have to say that the C500 has that same forgiveness. It has the sharpness, but the skin tones remain creamy. 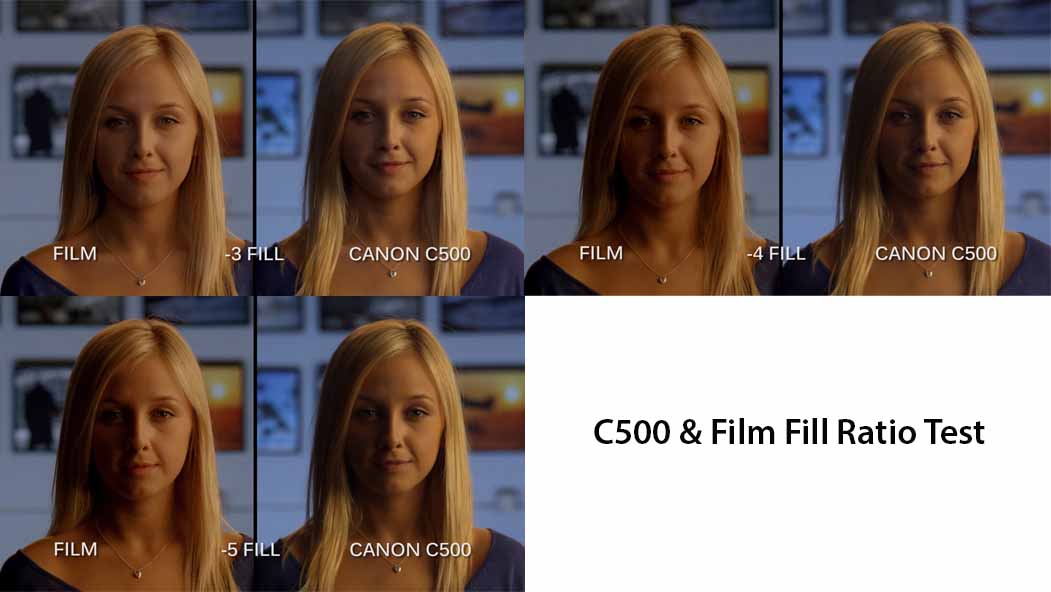 Understanding the dynamic range of a camera requires to use an old processing trick called “pulled process.” On film, there’s not really a way to do that other than pull process, which is a whole other topic that we will cover in a future blog post so you can see what it is all about. I love doing it. I did it on the movie Deadfall in all of the snow scenes. Every snow scene was pulled two stops, which is kind of extreme, but I thought it gave this beautiful, pearlescent kind of softening of the snow and the highlights. It just made it feel otherworldly, which is exactly the way the director wanted it. I’m pulling in third stop stock increments and we’re juxtaposing that with the C500 doing the exact same thing.

I’m going to start the pull process with film at 250 ISO. Notice the detail in the sky and the clouds. On film we can really see the subtle nuances in the grey and the white areas of the back lit clouds. This is where film just rules. Look at the cloud detail. Even as we move into ISO 200, the background is getting softer, but the detail in the clouds are still holding.

This is where the C500 shows its hand in a poker match. As I reduced the ISO off the native 850 ISO, the clouds that are just holding detail immediately start to clip.

In the C500 versus film latitude test, we pushed the limits and overexposed. You are really going to see film kick booty on this test. Film handles overexposure in such a more beautiful organic softer blowout than the C500. The C500 gets to a point where it just clips and produces this haloing around the overexposed areas. The C500 really shines in underexposure because it sees in the dark. With film, it tends not to see much more past -3.5 to -4 stops under. Immediately with the underexposing on film, you start to see the ruddiness, the red in the blacks, and the grain coming out. With the C500 at -3.5 stops under, we can still see the details in the faces of our models. Even though the C500 is incredibly underexposed, it’s still much cleaner and its gradation of falling off to black is much like a slope and not like a cliff. 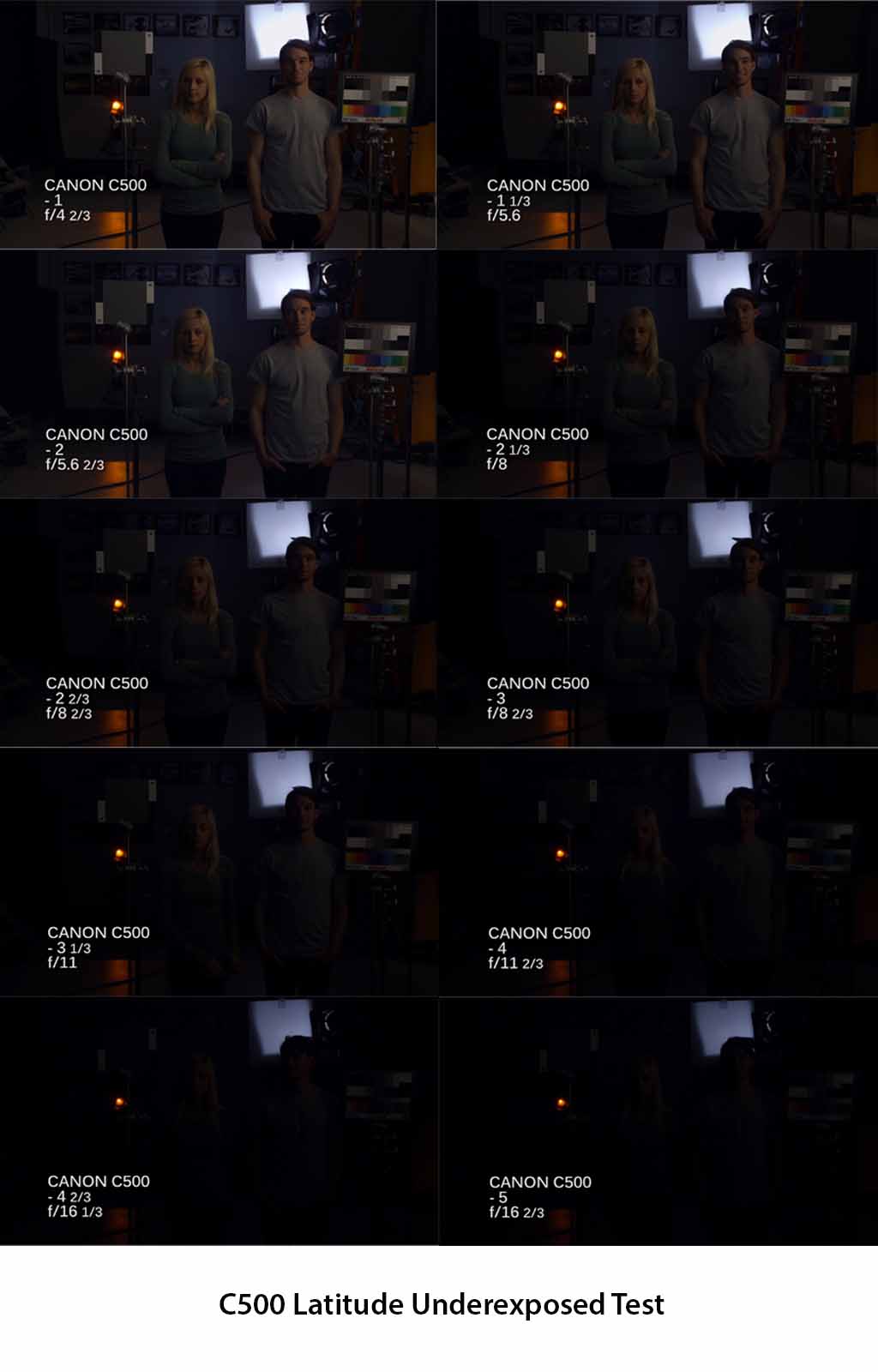