Into the Badlands was the testing ground for many pieces of new gear. Pushing equipment to its breaking point is what we do on features. The intense heat and humidity of New Orleans provided the perfect testing ground. One of the tools that we took with us was BlueShape batteries. For many years, I have used Anton Bauer. They have been the industry standard. Talking with the engineers at BlueShape and understanding the extreme conditions we would be under, along with operating three MōVI systems, we needed a battery system, not just a battery. This is what impressed me about BlueShape – not only their design, durability, and performance, but their battery system. BlueShape is a system, like Panavision is a camera system. These batts get many more cycles than other batteries and you have the ability to easily talk to your battery and understand its history. For owner operators, this is huge. You obviously want to make this investment, but you want one that will last long and a system so that you can get the best out of your investment.

We have a new writer at Hurlbut Visuals. His name is Cooper James – our next wunderkind and a powerful research specialist. He has dug deep to get you the low down on these impressive tools and educating you on their extreme power output.

Take it away Cooper!!!

Are you TIRED of your batteries not coming equipped with fun software? Are you BUMMED by the lack of options your battery provides you with? Do you love a good built in P-tap and a comprehensive list? Well, me too. To get to the point, BlueShape batteries are awesome. There are so many great things about these batteries, too many, in fact, to list here, so here are a few of my TOP reasons. This feature is incredibly simple and at the same time transformational. Here’s an example of what I’m talking about. If you’re running a RED package with (most) 3rd party accessories, you’re going to need P-Tap. Out of the box, the RED doesn’t offer this, unless you purchase special plates or adapters. This will allow you to plug your Teradek and Hocus Axis One directly into the battery. In fact, these ports can handle a combined max of 80w. With a multi tap, you could power a FIZ, cinetape, wireless video, a monitor, and basically whatever you need. Here’s the icing on the cake. If the P-taps get overloaded, then the protection circuit intervenes and cuts the power off, while leaving the main battery terminal unaffected. In other words, if you plug too much stuff into the battery, it will keep your camera powered up while turning your accessories off until you remove the overload. Boom.

BlueShape is at the cutting edge of product development and they are constantly thinking about what they can bring to the table next. They already have an impressive arsenal of products. There are too many to even list here. You really have to check out the website to get the full scope of what they offer. I’ll list some of the cool pieces. BlueShapes power up more things than camera, I use them for monitors and Teradek HD wireless video as well. 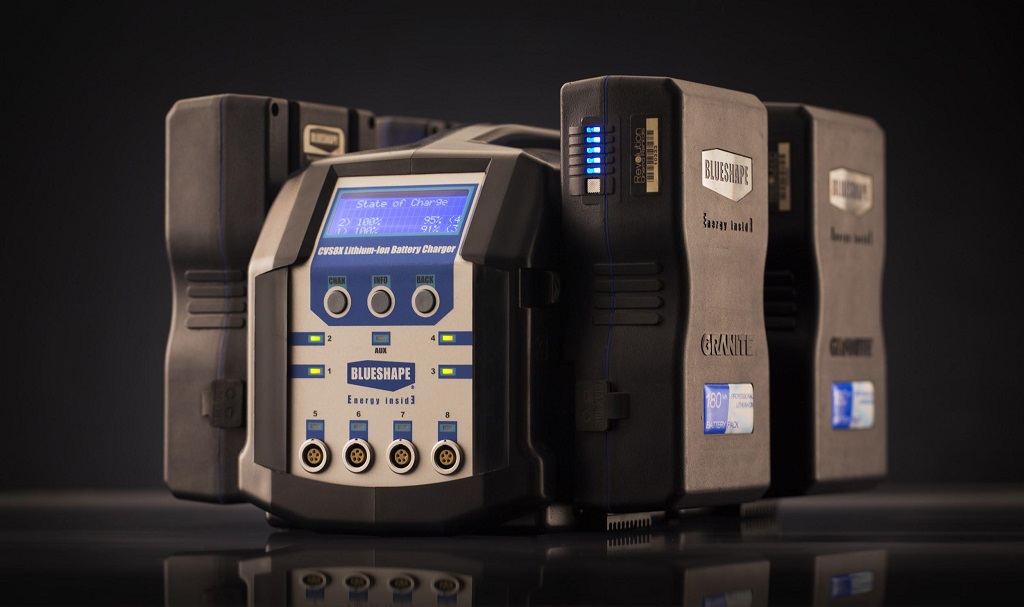 The chargers are surprisingly cool. They have a single, double, quad, eight and an eight wall-mount battery charger option. The CVS8X and CVS8XW have a display that allows you to monitor the charge progress of your batteries. I’ll touch more on this in a later point. Another cool accessory is the power station. They look just like the chargers, except they act like a block battery. They have a four and a two battery option. They are hot swappable, so when a battery is drained you can replace it with a fresh one and keep on cookin! Here is the power station in action to power the operator’s monitor and the Walter Klassen Wheels to operate the MōVI M15. The Power Station 4 has the option of 2x regulated 28V with a max 560W and 2x regulated 14V with a max 280W. They still have some kinks to work out. They aren’t weather resistant and they have cooling fans, which makes them difficult to use on location if there’s dust or moisture around. That being said, they are still an awesome unit to have in your arsenal. Chris Herr putting the final touches on the MōVI M15 on the Triangle Jib arm. The BlueShape BV090 Battery is a match made in heaven on the MōVI, giving us 45 minutes longer of battery life.

The MōVI, even the M15, has limited space for rigging. The BlueShape BV90’s slim design works perfectly in your MōVI kit and gives you about an hour of juice for the camera and your accessories. Union MōVI tech Chris Herr has some insightful thoughts on them:

“The Blueshape BV090 batteries are the perfect battery for any camera system on the MōVI. Their simple and slim form factor, built in P-Tap outputs, and high power to size ratio make them the ideal MōVI companion. The BlueShapes give the MōVI a longer run time than other similar sized batteries, and charge extremely fast on their quad charger. A single battery will power a Dragon with accessories for over an hour. The built in P-Tap outputs on the battery give you the freedom to power devices without the need for a separate battery plate. We will often strap a BlueShape to our Teradek receivers or monitors.” BlueShapes are like performance enhancing drugs for your camera, without all the long-term physical and political ramifications, of course. But, really, these batteries have some intelligent performance features that kick ass. These batteries come in an array of watt-hours to fit your budget, power requirements, or rigging situation. In our test, we put an Anton Bauer HCX against a Blueshape 190, and the BlueShape beat it by almost an hour.

They hands down crush the HCX! They can operate in a wide variety of weather conditions (-4f to 140f). You can drop them from up to six feet without any internal or external damage, and they are water resistant. They even make a model that’s designed for use under continuous rain! Beyond the batteries themselves being water resistant, the v-lock design shields the connection pins from the exposed air. This doesn’t allow for the possibility of water making contact with the pins, unlike the goldmount where the pins are still exposed to the open air. That alone is pretty amazing, but I’m just getting started. When the battery is on the charger, they start the charge cycle with a lower voltage. After about 18 minutes, the charger dramatically ramps up the input voltage, allowing the battery to charge rapidly. The BlueShapes are engineered in such a way that they do not develop a memory, so you can theoretically charge them from any point. The battery will automatically enter a self-protection protocol if it is overloaded or drained beyond 9A. Simply putting it on the charger or removing the overload will correct any problems. But, by far, the most important and impressive feature is…

Blueshape has given you the tools to talk to your battery. Gone are the days of taking your batteries in for service. Now you can do it by yourself and even in the field. In fact, they actively want you to keep track of your battery. Using their software, their special USB cable, and your PC (sorry mac users), you can hook the charger and batteries up to your computer. This allows you to track important information about your battery such as overall voltage, single cell voltage, temperature, remaining capacity, serial numbers, and number of cycles over its lifetime. They even have real time graphs as the batteries charge. It’s a major step in the right direction and it allows you to care for your batteries and manage their usage over their life.

Get out and use these batteries! They’re the best on the market and the people at BlueShape keep stepping up their game. If you can’t afford to buy them, rent these bad boys. Call Revolution Cinema Rentals for a quote. Filmmakers Academy: On Set of Fathers and Daughters (Day 3)