After months upon months of hand-wringing anticipation, the latest iteration of the Batman franchise released in 2022. And it was gorgeous! The cinematography of The Batman was a collaborative effort between director Matt Reeves, cinematographer Greig Fraser, and master colorist David Cole. They treat audiences to a new concept of Gotham – one drenched in gleaming lights, streaming rain, and fiery infernos that complements jaw-dropping action sequences. If you haven’t watched the film in Dolby Vision, well, you haven’t seen it the way the filmmakers intended.

Watch the Cinematography of The Batman Sound + Image Lab

The director of the Dolby Institute Glenn Kiser sat down with director Matt Reeves and master colorist Dave Cole to discuss the look of The Batman. Watch the full interview below!

According to Matt Reeves, there were two primary perspectives of the film – Bruce Wayne and the Riddler. However, even though these two perspectives were the focal points of the film, he wanted Gotham to also serve as a character. So, they passed around films that would match the tone of their newfound approach to the franchise.

Reeves saw the film as a thriller a la classic conspiratorial films like All The President’s Men and Chinatown. So, he and Fraser passed the classics back and forth and found inspiration in their iconic presentations.

Reeves and Fraser first collaborated together on the film Let Me In before reuniting for The Batman.

They shot The Batman with Arri Rental’s Alfa anamorphic lenses because Reeves liked the widescreen quality of the image. However, as Reeves puts it, “those are some pretty messed up lenses.” That’s because it’s essentially unpredictable the way that the bokeh and the focus falls off the lens. Not only were the edges of the frames completely distorted, but the focus would be in the strangest areas of the frame.

Since they decided to shoot the film digitally as opposed to film, the idea was that the anamorphic lenses would add texture to the cleanness of digital. From early on in pre-production, they knew that they would use the Arri Alexa LF, and went to downtown LA to conduct their very first tests to gain an understanding of what Gotham could look like.

The Color of The Batman

Cole and Fraser developed their collaborative relationship over the past five years, spanning from Vice (2018) to Dune (2021) and now The Batman (2022). According to Cole, through their collaboration, they experimented by doing actual grades and extensive tests to work out how to create LUTs (lookup tables) to inform how the images would look in dailies. That way, they take care of the discovery at the beginning of their process rather than finding it at the end. By getting into post-production early on, Fraser then constructs a color bible of the film for Cole to reference and work from. Then, after this process, they started color grading The Batman. Fraser was in the room with Cole for a few weeks and their in-depth preparation allowed him to eventually take some creative liberties. For the first big teaser in 2020, Cole took a stab at it and recalls the reaction of his collaborators. “I just remember, like, Matt and Greig sitting in a theater over in the UK saying, ‘Yeah, that’s it.’ So, it was good…. We are very much in cahoots with the look.”

Reeves likens Cole to a magician saying, “just in terms of what Dave does that nobody has any idea what he’s doing, like, there are things that he can do, and, like, how did he do that?” Sometimes there are points in production, Fraser will get the image 90% to where it needs to be and Dave can fix the rest in the DI, whether it’s sharpening or rebuilding parts of the frame. “Dave comes from working with Peter Jackson,” continues Reeves, “and I was so impressed and taken with the way that [he works].”

The Batman is one of the most visually stunning films of the year and what accounts for its texture, technological decisions, and craftsmanship is a result of years of experimentation and collaboration.

If you enjoyed this interview with the filmmakers, we recommend checking out The Color of Dune with David Cole as well as The Look of Dune.

And, if you want to learn from the master himself, join Filmmakers Academy as an All Access member to get courses in coloring instructed by Dave Cole. If you’re a colorist or an aspiring colorist, you can even access Cole with a 1-on-1 video call where you can get your questions answered!

Find out how to experience The Batman in Dolby!

Erratum: We incorrectly stated the type of lenses that Greig Fraser, ASC, ACS used to capture the world of Gotham in The Batman. For this work, Fraser primarily employed Arri Rental’s new Alfa anamorphic lenses. 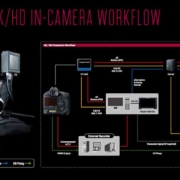