In Part 2, Filmmakers Academy producing mentor Jamee Ranta explores the finer details of communication and provides some tips and solutions for when challenges arise.

Realistically, you can prepare for the production as best you can but at some point, you will have to deal with some unforeseen variables. What happens if something goes down on set in the middle of all the action?

Jamee notes that this is where you need to utilize the conflict resolution skillset.

Conflict resolution has three parts to it:

Everyone has a very specific relationship with money, from their personal set of experiences all the way down to what information they’re receiving while on set.

As a producer, it’s your job to communicate the monetary needs to each department in a healthy and respectful way. Try to make it a win-win situation between you and the other person.

Both you and the other filmmakers enter a “conflict” knowing that you want to win. In the end, you both have a like-minded goal – an amazing final product. In order for that, you must have respect for the other person and give them time to communicate their thoughts and/or feelings and solutions to a problem. Ultimately, understand that time is money. A situation or conflict that occurs on set in the heat of the moment costs both time and money. That’s why it’s very important to take the time to develop your conflict resolution skillset.

The three points of money, communication, and respect lead to the building of trust.

When working with a team, you want to be able to build trust with them. As the leader, you’re here to serve, support, and honor them. However, that also works the other way around. You want your team to also honor the decisions that you’re making, and trust that they’re the right decisions.

You are going to make mistakes. Nobody’s perfect. And it’s completely okay to make mistakes. The most important lesson here is to remember to be resilient and stay focused on the end goal. If there are obstacles, then find solutions. Failure is part of the journey to success everyone must endure. A big part of that is setting healthy boundaries.

For example, say you’re in a situation that’s hyper-creative and last minute. All the people are trying to come up with some cool things to add to the scene, which happens all the time.

However, something seems a little bit unsafe. Or, maybe something seems like you’re not going to have the time to put into it or you’ll go over budget. You must have the strength to listen to your gut and speak up and say, “Hey guys, appreciate your ideas. Don’t think we’re going to make it in time.” Halsey’s ‘If I Can’t Have Love, I Want Power’

Set boundaries with your creatives. At the end of the day, Jamee explains, the producer is responsible for overseeing and organizing the entire production from legalities to financial decisions to some creative decisions.

It’s important for the producer to be mindful, understand the overall scope, and make sure that it’s all balanced.

In order to succeed as a producer, you must understand how to hire effectively. Not only are you hiring for their skillset, but you must make sure to assess qualities like interpersonal skills as well as the tools and equipment they need to do their job well.

Jamee advises that it’s crucial to create an experience and team that feels safe for all. It’s important to establish trust and expectations through an open line of communication.

A large part of that is advancing your communication skills. Establish trust. Be fair but firm. Show that you are all on the same team with the same goal in mind. If you respect them, they should respect you. And if not, then be sure to hire creatives with the interpersonal skills to succeed.

Sometimes you will fail. But it’s the journey and the lessons learned through failure that make you a master at your craft.

Ranta executive/produced Halsey’s full-length feature film If I Can’t Have Love, I Want Power, a genre-bending film scored by Halsey’s latest album of the same name and directed by Colin Tilley. The film premiered in IMAX theaters, selling out its limited global premiere run before becoming available on HBO Max and other major streaming platforms. 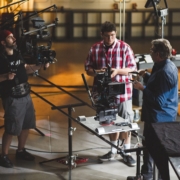