With the growth of “Filmmakers Academy” (formerly Shane’s Inner Circle), we have seen many careers take off before our very own eyes. I get asked quite often what type of members are inside Filmmakers Academy and what kind of work they do. This idea dawned on us – with so much inspiration being shared within the Filmmakers Academy between members, motivating each other to do great work – why not take the time to begin to showcase different members and their work? We wanted to give an “inside look” to the people who are part of this community of filmmakers.

About a year ago, maybe almost two years, I sat at Don Cuco’s Mexican Restaurant in Burbank, CA with my friend, Director Andrew Batista, as he told me about his latest adventure that was on the horizon. This project was a culmination of creation for Andrew and I was excited to see where this would take his future as an artist. Andrew and I met through mutual connections from “Shane’s Inner Circle,” even though we both moved to Los Angeles from Pittsburgh, but never met while we lived there.

I wanted Andrew to share his process and tell his story. Even though I never spent a day on set with him for this project, we’ve spent many nights sharing tacos and drinks as he told me about the story of Jesper Vesterstrom and the evolution of this narrative. FA: What started this film, how did this story come to life?

Andrew: The story was born out of several lunches and coffees with Jesper (Vesterstrom) and just getting to know him and his story. We talked a lot about his accomplishments as a competitive windsurfer which are incredible, no doubt, but I needed a bit more to go on. I needed to figure out what drove Jesper.

The light bulbs started going off when Jesper relayed the story of how his father had urged him to back off windsurfing to live a conservative lifestyle so that he’d be able to save up and retire when he was older. However, when Jesper’s Dad was diagnosed with ALS, it changed everything for their family.

As his Dad’s disease progressed, his father began to realize that he would never see his retirement but was instead experiencing so much joy when Jesper would return home from his windsurfing competitions. Knowing that he had only a few weeks left to live, Jesper’s father asked him if he could ever compete with the best windsurfers in the world, essentially challenging Jesper to be the best and giving him the permission he needed to pursue his dream.

On the bluffs. #baja #Mexico

FA: Once you met with Jesper, what made you decide to go to Mexico and make that your landscape?

Andrew: Mexico became our destination in part because of our schedule aligning with the high wind season of the town of La Ventana, Baja. After chatting with our executive producer, Donna Woods, she made a really strong case for shooting in Baja where she’s been windsurfing for her entire life, and knew we would have the support of her windsurfing community there. I had my reservations, but after our first day of scouting, I knew she was spot on. One of her friends and an amazing athlete in his own right, Wyatt Miller at Pro Windsurf La Ventana, was instrumental in helping us scout locations and showing us a side of Baja that many folks don’t get to see. We were lucky to have him on the team.

FA: How did you make your technical choices for shooting with the Phantom, Alexa, and RED Dragon?

Andrew: We knew that the element of time was going to place a huge role in the piece. On one hand the time Jesper and his father had left together was dwindling. On the other hand, Jesper was a competitive racer striving to be the fastest and finish the course in the shortest time. That contrast was important in selecting the Phantom so that we could essentially have some control of time by slowing it down to 1000 FPS.

We also really wanted to give the project a larger-than-life feel. Considering our gorgeous location and that most of the windsurfing films that we saw when we were doing our research hadn’t taken a cinematic approach, we opted for anamorphic. After a pretty quick conversation, Dan Stewart, our incredible DP, and I agreed that the Alexa mini with Cooke anamorphics package was the way to go.

We also really wanted to set Jesper against the backdrop of the untamed Baja and wanted to use aerials to gain that perspective. I normally shoot RED and knew that we could strip the camera down to its essentials, strap it to a drone, and let it rip. It worked like charm and we captured some beautiful aerials at tops speeds.

FA: Talk about your editing choices for the narrative and how you went about deciding on the timing/pacing with your score.

Andrew: I had a general idea that we would start low energy and build up to almost hurricane-level chaos as the story unfolded, mirroring Jesper’s inner turmoil. The reversed Phantom footage of the wave really became our anchor, though, working almost like the chorus to a song, each time taking on a slightly new meaning. At the end we see the full evolution of the wave as it recedes, connecting us both to the ending and the beginning in one image. The moment works to connect us to Jesper and his relationship with his father, while also reminding us of our own. A food for thought sort of thing.

FA: What was the process like for your score? Did you enlist original music or use stock music?

Andrew: My favorite part of the filmmaking process is being able to collaborate with so many talented people in their respective fields.  For this project, I worked with composer James Everingham who is out-of-this-world talented.  My brother and producer of the film, Anthony Batista, had found James’ work on Soundcloud and when he started talking about his love for Tony Scott films, I knew we found our composer.  If anyone wants to talk about Spy Game and Robert Redford, we can talk for hours.  The only problem we had with James was that he was based in the UK and I was in California. However, James set up a system through Skype and Source Connect so that we could watch the film together and I could listen as he scored the film in real-time. It was rad. At one point, James was writing in the UK, Anthony was Skyping in from NYC, and I was Skyping in from LA. 3 times zones, one movie. The future is now.

FA: What was it like working with your brother Anthony (Batista) as the Producer?

We both grew up with the same influences (in film & photography) and have been talking about them and working together on projects for years now. Anthony has been in production working as a producer and fashion photographer so he “gets it.” I’ve gravitated toward directing over the years so when the opportunity came about for this film, Anthony called me up and we decided to team up. It’s really the best of both worlds.

With his experience and our background of shared influence, he can anticipate what I might need and vice versa. You hear siblings talk a lot about having that connection to each other mentally and we definitely had that on this project together.  Years of sharing art, interests, and passion all came together to make this possible. I’m lucky that I’m able to work with my brother who also happens to be my best friend. I’m looking forward to the day our other two brothers can collab with us on a project too.

FA: How did Anthony’s career as a Photographer get incorporated into this project?

Anthony is one of the best photographers I know. He has an incredible eye for framing, style, art direction, all of it. You can’t teach somebody the kind of taste Anthony has. So when we first started talking about this project it was just a natural fit that we would be collaborating together on building the world of the film. Considering our beautiful location, art direction, and handsome subject, it was really the natural progression to include a stills portion of the shoot. We ended up with a complete package of stills and videos. Like a whole campaign or something. It’s really great.

Praying for just one more day like this… @jespervesterstroem

FA: Pick one part about your process of creating this film that you can share that would have helped a younger Andrew when he was getting started as a filmmaker.

Andrew: Work with people more talented than you. Despite the logistical challenges of shooting overseas and on the water, everyone on our team was total pros and was able to anticipate problems before they happened so that we could focus on telling what I think is a really beautiful story.

Find “Chasing the Wind” on Vimeo

Learn how you can also be featured, right here! 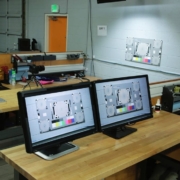 The New HP DreamColor: It’s all about the Color Space